Review of Inalienable by SE Anderson 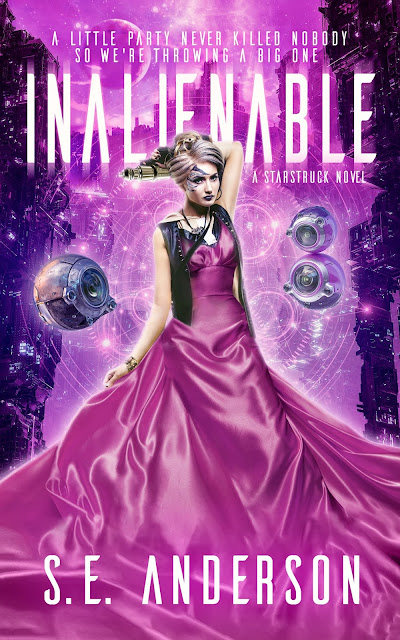 Framed for a murder you actually did commit? Rude.
Sally’s saved the Earth from another alien predator only to be rewarded with a jail cell. With her family threatened by the Agency if she doesn’t rat out Zander and Blayde, her only option to escape the Alliance is to plead ‘aliens’ in a court of law. At least at the Hill Institute for the Criminally Insane, she’ll have time to clear her mind and focus – on revenge.
Finding a way to break out of an institution and cross half the galaxy would be much easier if it weren’t for the midnight screams of terror and eerie doppelgangers lurking at the Hill. With the Agency too focused on capturing the siblings to actually protect the planet, it’s up to Sally to save the day.
Between murder-clown apparitions, alien advocacy groups, and a new translator with compulsive corporate branding, Sally’s got her work cut out for her. Too bad the best plan she can come up with amounts to faux-regicide with the help of an exasperated starship captain. Will she ever find the time to just Netflix and chill?

I’ve been following the Starstruck series since I found them years ago and was desperate to catch up with the ones I’d missed. This book picks up from the end of the last one, and I was in for an amazing ride.  I ended up reading it in one sitting, and am so glad that I’ve pre-ordered the next one because that ending almost killed me! The story is so beautifully written, making you feel like you’re right there alone with Sally and the gang. I adore the characters, adore the world building and love the way it feels so real, never shying away from the realities of life. Highly, highly recommended!