The Trials Of An Indie Author: Answering Difficult Questions 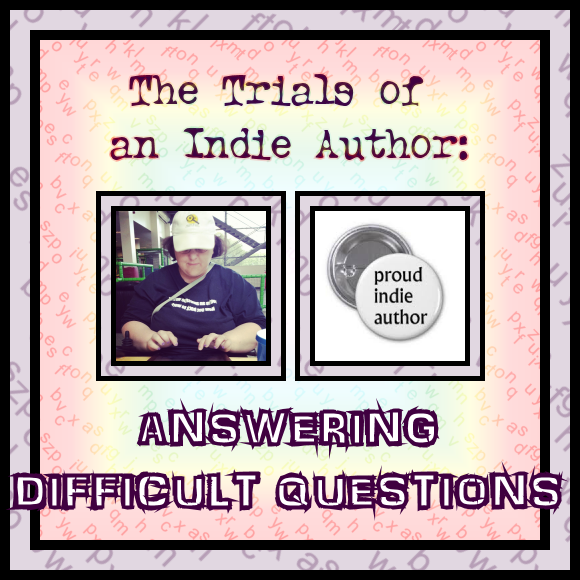 THE TRIALS OF AN INDIE AUTHOR: ANSWERING DIFFICULT QUESTIONS

Last week I talked about making small talk with strangers as a crime writer (found here) and I mentioned in it that I would be delving more into the awkward questions that you get as an indie author this week, so here we go. I've been published now for seventeen years, and I gotta say that the difficult and awkward questions don't get better with time. I know you all probably know exactly what questions I'm about to talk about, but in case you don't, I won't go on for too long.

One thing that I've gotten used to when people ask what I do for a living, is being asked whether or not  I make money at what I do. Those questions I don't mind so much because it's pretty much a general thing. I'm not someone who feels comfortable talking about money with even my closest friends and family, so telling a complete stranger would freak me out. But being asked if I actually make money is a lot different to the one where you're asked how much you make a month.

I don't understand why people ask this, like it might be my British side poking through, but would you go up to another stranger, or even someone you kinda know and ask them their salary or monthly income? I mean, if you would, then I guess at least you're consistent? I don't even like that question from my parents, though it's usually my dad and step-mum who are interested and I still stammer over the amount because I feel like I'm being asked to prove that I've made some contribution to the world by placing a monetary value on what I do for a living.

Now you might think that's me being precious or me thinking that I shouldn't have to be open and vulnerable with even my parents, but to be honest, I wouldn't, and have never, asked what they make, and it would be just as awkward for them to scramble for an answer as it is for me. I know it's a common one among authors of both paths. Those who are indie, and those who are traditional are asked this one the regular. It's not always family or friends either, people hear you're published and they wanna know how much your advance was (for traditional) or how many copies you've sold and made (for indie) and both of these are such personal questions that I really do question why it's different, it seems, for creatives than it is for those working a regular nine to five.

I know that transparency is a big thing in publishing. People want to know for legitimate and good reasons, and for those people, I would, somewhat awkwardly, open up about what I've made and how and all the rest. For some writers it's not a difficult question, they're happy to talk about it, and in that regard I feel like it's okay, because it's their choice, but for me, and a lot of the writers I know, it's very much a difficult question and one I'd like people to stop asking me.

I didn't want this to turn into a long rant and whine about being asked about money, so I'll move onto some other difficult questions, but I hate to say it, they will touch on the money angle as well. I've been asked how many copies I've sold in total. I don't know about you, but when people ask me this, they don't want vague numbers, they want the exact total. I have no idea and it would take me a while to work it out. I know I've sold over ten thousand, but I passed that in 2012 I think, so it would be above that now. Even typing that sentence, despite the fact that it's something people could find if they wanted to look for it, makes me feel like I'm bragging on myself, and I've never been comfortable doing that!

There's also the questions about marketing costs, which is one that I don't think is too awkward, because there's a real reason behind it. After all, if you're trying to budget for yourself, then you need to know what kind of ballpark the advertising and marketing are going to cost you so that you can save accordingly. Overall, the awkward questions, the difficult ones. I feel like they go hand in hand with being published, and while some of them make me wince and cringe, I think it's just a case of clenching my teeth and getting them over with. People are curious by nature and you can't help that.

Follow Joey here on her blog, or on Facebook or Tumblr to be kept up to date with the latest news regarding Joey and her books.
Posted by Joey Paul at 06:00