Moulding Your Characters - The Creative Process 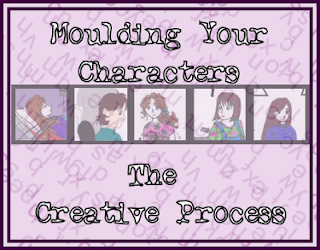 So, you've got the best idea ever for a story. You have the plot down, you're planned it all and then you realise that you have no idea what kind of characters you want to write. You know what genre you'll be writing (for the sake of this piece I'll assume, teen fiction and romance or crime genre) and you know where you want it to go. You've even got their names and you have some idea how you want them to look and act. So, you're all planned then, right?

Well...I wouldn't put all your eggs in the basket just yet.

I can only speak for myself and some of the other writers I've spoken to about this, but it's not just as simple as picking out names (I'll do a piece on that another day) and assigning a description and then away you go. Imagine, if you will, that you're playing The Sims (doesn't matter what version) you've made your person (character) and you've given them the right body size, clothes, eyes, face, even down to what they'd wear on a posh night out and you click "done" and volia! You've made your character.

Only, if you've ever played The Sims you'll know that they start out with no skill points in ANYTHING and you have to work at certain areas to get them to even cook without burning down the house. As nice as it is to play God with Sims and just not call the fire brigade. It's a good analogy for what it's like when you make characters. You can start the story with them made and no skill points. But once you've started, you need to mould your character, and you need to do it within the first few chapters before your readers decide that your character is two dimensional and that they are not interested in reading about them.

How do you do that? There are a number of ways to add "skill points" to a character. You need to not just think about their hair colour and the way they look, but you have to include interests, like do they enjoy sports? Or reading? Do they prefer their tea black or with milk or not at all? If they do like tea, can it be any kind? Herbal? Chai Latte? Or are they a staple English Breakfast, milk with two sugars kinda person? Do they have a favourite author? Do they only like certain kinds of music? Are they a TV watcher? Do they watch certain shows, or do they just put it on for background noise? Do they follow the news? Get a newspaper? I could go on and on, but I think you get the picture.

It's the little things like that, that will make a character all that more believable and "real". It doesn't even have to be big things, it can be the smaller details that make it all that much better. You want your readers to relate to the character, but you don't want to also be name dropping things like Starbucks every few moments. You can have product placement, sure. It would be a pretty strange world if they didn't have things like Coke and Pepsi and Starbucks etc.

You'd be surprised how many people tell you that once they start to mould their characters and tell their story that things did not turn out the way that they had planned. I've had the same thing happen. Some of my characters I've planned something big and they've refused to play ball. That may sound like I'm a bit out there and think that they are real, I don't, but your writing can be influenced by the way you've moulded them and the choices you've made for their personality. Sometimes you'll write a scene and just look at the reactions and think "Nope, ain't gonna work" and then it's back to the drawing board. It happens to us all, well the majority of us at least.

So, you need to do more than just describe them, you need to make them into a person. The idea being that if you were to take them out of the book and put them on the screen they would stand up to be somewhat normal. If they can stand alone OUTSIDE the book, then you've done it well. Another thing to remember is that you don't have to list all their likes and dislikes when you introduce them in the story, whether it be in first person or second or even third. No one wants to read page after page of how So-and-So likes to paint their toe nails this colour on a Tuesday because it matches their outfit. It's not so much as putting the information on the page, as having it ready in case it comes up whilst you're writing.

Good Luck and have fun, because if you can't have fun, you're in the wrong job.

Follow Joey on her Facebook page, or here on her blog. Be kept up to date on any news regarding Joey or her books.
Posted by Joey Paul at 08:55