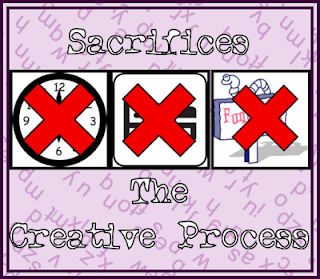 Sacrifices
When you're a writer, you have to be prepared for inspiration to strike at the most awkward moments. I've already done a piece of what happens when it's 3am and you're suddenly inspired (see here), but I'm not just talking about having to give up a little sleep. Sometimes, you have to be prepared to give up a lot more than that. Like going out with a friend for a drink, or some free time you had planned. And sleep too. I don't mean that you can't do those things, of course you can! I'm not your mother and you can spend your time however you like!

But, be prepared to be stuck to a deadline if you're working with a conventional publisher, hell, even if you work for yourself. It's not just social things, but physical things too. Writing rarely makes you a lot of money straight away. If you're one of the lucky ones who writes a bestseller and makes their millions? Then why are you reading my blog? Go spend it! And live a life of luxury! I'm not one of those, and to be honest, not many writers do end up making huge amounts of money. The big names like Harlan Coben, Jacqueline Wilson, J K Rowling, Sue Grafton and James Patterson, they write more than one bestseller and they do make enough to live off what they make...and many others do too.

I guess what I'm trying to say is that you won't instantly find an agent who loves your stuff. You won't instantly get accepted with an advance for the next novel the first time you approach a published. Your book won't sell millions, even thousands the moment it's released. If you're in the writing business to make yourself a few million. I suggest you don't quit your day job and get used to the fact that it is not something that will happen overnight. It's something you have to work at, REALLY work at. Even if you work for years and your book(s) sells a lot of copies, you still won't be making millions. So, get used to sacrifices.

For me, personally, I've sacrificed time, energy, money, fun, sleep and the physical things to write and to keep writing. No, I don't want a medal, and I'm not telling you this so that you'll think more of me. I'm just telling you that to get to a point where your work is selling and you're making some money, you need to be ready to give a lot of things up. Taming your muse (piece found here) and writing a lot of good stuff is really only half the battle, as anyone who has gotten published will tell you (check out the after process). A lot of good writers, hell, even great writers still have to hold down a day job and only get the chance to write when they have free time. Those who can take time to write are always struggling to find "more" time than the twenty-four hours in the day to write.

Sacrificing to do something you love is not limited to the writing track. It's part of being a grown up. Sometimes you have to do something you loathe to be able to do something you love. For people who think that writing is as easy as quitting your day job and just banging out some words on a keyboard, I have some news for you - it's nothing like that.
Even if there was a way to live off money you don't have and write 24/7, it's not always something that's possible. You do have to sleep and I don't know about you but the older I get, the harder it is to function on less sleep. (I also have M.E, so that could have something to do with it.) Add to that, that you also need to eat, and although you can kinda manage that while typing (she says trying to eat a banana and type at the same time) it's not healthy to live and breathe one thing. You need to have some fun and although you won't be able to do what you want ALL the time (unless you're like two, in which case, go right ahead!) There has to be some balance between the things you HAVE to do and the things you want to do, namely writing.
Writing is a passion for many, you can't make millions overnight with little effort and at times you'll make sacrifices and you'll have to learn to live with them. Even if you have a natural talent for telling a story - as some people do (I'm not one of them) - then you have to put your time into not just telling the story but making it into something you can sell. Sacrifice a little and reap the rewards of creating characters and universes. It's more fun than this piece makes it sound. Good luck to you all!
Follow Joey on Facebook or on this blog to be kept up to date on all news on Joey and her books.
Posted by Joey Paul at 16:18