When Inspiration Strikes - The Creative Process 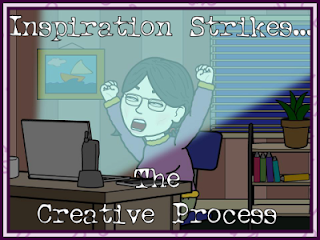 You're a writer which means you're pretty much reliant on those creative juices flowing by whatever means necessary. You find something that works for you and you stick to it. Maybe you have a routine you go through - a special cup, a special pen, paper (for those who are old school) or you have a set up on your laptop for when you want to write. Generally, it keeps you churning out the pages and that's the main thing, right?

So, it's getting late and you realise you are so close to finishing this chapter but you know that it will be a few more pages and it could be late. If you're like me, you know that sometimes you just can't leave it and pick up again in the morning. Sometimes, you have to sacrifice sleep to make sure that you stay in the "zone". Inspiration is a little sod, and you are at it's mercy.

This happened me to me recently. I had been blocked and couldn't seem to get started on the next few chapters of one of my current works in progress. Now, if you know anything about me, you'll know that I generally write two books at once (here). You'll also know that I'm a planner (here) and I like to stick to the plan. So, when faced with inspiration dangling in my face and basically telling me that I could go to bed, but there was no guarantee it was going to hang around until morning.

There was the other problem I was faced with which was that my brain was plagued with what I could write and added to my problems with pain management, I decided that I would get the chapters finished, give into the master named "Inspiration" and *then* I would go to bed. Yeah, if, like me you've ever done this, you'll know that it rarely ends up with you getting much, if any sleep.

1. Routine is good...
Like so many writers I have my routine when I'm going to do some writing. I make myself a nice cup of tea. I open my word program, sometimes I put some music on to set the mood and then I read through the last couple of chapters to put myself in the zone. If I'm lucky, I'll just need a sentence or two before my brain kicks into gear and off I go.

2....except when it's not
However, sometimes routine is the thing that stops me. I personally don't work that well under pressure. Call it a character flaw or whatever. I like to know that I am in control of when whatever I am doing is due then I work better and that's one of the reasons I work to my own deadlines with a lot of what I do. So, sometimes changing some of the routine - like writing a different book than the one I'm supposed to be working on, or doing some planning for later chapters will be enough to keep the inspiration flowing

3. When it works, keep going
Since I already did a piece on writer's block (here) I'm trying to keep this piece about what I do when inspiration strikes at a bad time and this is one thing I try to do. It can be 4am, when I roll over and go for a pee and I realise that I can do this or that with Tara (I'm generally always working on a DYING THOUGHTS book, so this  usually is what I think about) or that other character(s) and if I can, I write it down somewhere - thank goodness for tablets - so that I can come back to it in the morning. If I'm working on something late at night and I feel like I'm there and that if I stop it would disrupt me, I try to keep going. It isn't always possible. I do have other responsibilities like uni work, oh and that eight year old that likes to go to school on occasion. However, sometimes one late night is worth the results. It's when they become too frequent that you have problems.

4. It is never inconvenient to be inspired
When I think about some of the places and times I have been inspired to start a book or carry on with a story, I laugh. I remember once, early in my writing career when I had basically given up with a book (it was the first DYING THOUGHTS actually) and I had sent chapters, four at a time, to a friend to read. I had basically backed myself into a corner. Anyway, I went on holiday and met up with her and the first thing she asked was when was I going to finish the book because she was desperate to know the answer. Inspiration struck and I spent the evening in the hotel writing the ending. So, from that I conclude that there is never a "wrong" time for your muse to start singing from the right hymn sheet.
So, whether the light bulb goes off when you expect it to, or if it waits until you're fumbling round in the dark for the light switch, remind yourself that it's all for the greater good. Inspiration leads to stories and stories lead to creating. Creating is fun and, for me the best part of the job (though arguably it's the only part of the job!)
Now, I'm running on about three hours sleep so I'm going to go back to the less fun part of the job and do more editing...
Follow Joey on Facebook or on her blog here to be kept up to date with the latest news about Joey and her books.
Posted by Joey Paul at 09:21