Sorting the Good from the Bad - The Creative Process 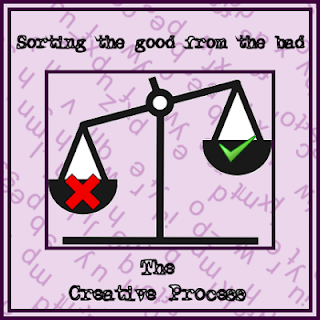 Sorting the Good from the Bad
When you've been writing for a while, you realise that you have collected ideas, as it were. You have this bunch of them in your head and you have to decide which ones are viable and which ones need to be forgotten about - no matter how much you want to do them. That process for me takes a lot of time because sometimes something will seem viable and I'll start writing it and then get stuck about three chapters in. So, I'll put it to one side to come back to some day and I know other writers do this too.

The question though is, how long does it have to sit there before you realise that yes, it was a great idea, but it just won't work, no matter how hard you try and how much research you do. Sometimes it's because the time frame as passed and you'd have to make it a seriously dated book before you could even begin to write about it. That limits you in some ways because then you have to be sure to not include things like Facebook and Twitter and such which haven't been as round as long as other means of social networking.

The other problem is that sometimes, the issue, the main piece of plot you were going to base it all around just doesn't jive for you anymore. Maybe you realised that having a ghost follow someone around wouldn't work because you don't really like writing supernatural stuff like that. Maybe you want to write about how hard it is to be a gay couple when marriage is illegal (which, as of writing in the UK, it's not anymore) I mean yes, you can focus on the other pieces of the plot, but if you're main story has gone then all you have left are characters going through life and sometimes, hell, A LOT of the time, that's just not enough.

So, then you have the choice of which ones you want to write and which ones you'd prefer stay in a dark and dusty hole somewhere to never be mentioned again. I'm sure we all have that book that we wrote, that got stupider and more unbelievable by the chapter and eventually you buried it and then decided to just shred and burn it so that it could never see the light of day...or is that just me? Either way, you do have to make a choice between which ideas you move and make into a story and which ones you decide are best left alone.

It's not even as if you have to leave them alone forever, you can lift pieces, characters, sub plots etc. Maybe even the outline of the idea, but you can't write the story the way it started because either you just don't have the insight or it's a crap idea. Accepting that, acknowledging that and working through that, does not make you a bad writer. It doesn't mean that you should throw our your pen and paper (or computer and keyboard if you're like me) and never write again. It just means that you are aware of your limitations. That's not to say that you should never venture out of your comfort zone (that's a piece for another day) just that you have to be realistic about what you can and can not do with a story.

I've been there, I have boxes and folders of stories that have yet to become something more than an idea. I've taken characters from those stories and I've ditched stories. I accept that I am not going to be able to write about absolutely anything I please because I'm human and I have limitations. This is not to say that I can only write what I know, no, that's not what I'm saying. Research (here) exists for a reason and as long as the plot, characters and everything else is something viable, you can research your way into a brand new story that stands the test of readership.

I guess my point is, once again, that there is a balance to be made between what is good (for you as a writer) and what is bad (again, for YOU as a writer). You have to find a way to work out the good ideas from the ones that will leave you screaming, crying and possibly in a permanent catatonic state because it's just too damn impossible for you to make it work. This is not a sign of weakness, in fact I'd say it's more about knowing your own limitations, whatever they may be - it is totally unique to each person and as a writer, you need to learn your own.

Now, if you want to go out of your comfort zone....well, we'll leave that for another piece. Sort the good ideas, ponder on the bad and write and write to your heart's desire. It is, after all, the name of the game.

Follow Joey on Facebook. Or follow her blog here. If you want to be kept up to date on all news about Joey, her books and anything else she does. You can even subscribe by email in the sidebar.
Posted by Joey Paul at 12:31