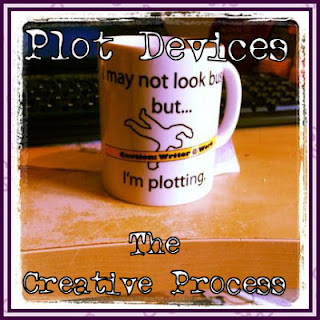 Everything you write will have a beginning, a middle and an end. If it's non-fiction it will have a subject, if it's fiction, it will have a plot. The trick to being a writer of fiction is that you know how to make the plot work for you without it seeming like you're giving everything away too soon. That's where plot devices come into play.

When you start writing you should probably have some idea how the story is going to go. I personally plan a lot (as found here), but you don't have to do that to write. You can use whatever technique works for you. I always find that I write better when I know what is supposed to be happening, which is why I plan as much as I do for my books now. In the beginning it was a vague idea and it worked for some books, but others I really struggled with.

Plot devices are what move the story forward when you think you're stuck. They're the things that help a writer rescue themselves from the despair of writer's block (piece found here). Some writer's will use plot devices as a way to have an undercurrent plot running along at the same time as the main one. Others use them for a little quirky piece in chapter 31 and resolve them before never really mentioning them again. You can do either or you can find a new way to use plot devices to help you. There really is no right way and don't let anyone else tell you there is.

Plot devices are useful, they can restart a piece when you've struggled to find the words to move it on. They can't be used all the time though. Yes, you should have a reason for every scene, but at the same time, there should not be a dramatic plot piece happening in every single chapter or paragraph. Sometimes, to move the story on, you need to have a little day to day normalcy. Again, though your mileage may vary.

Writing fiction is about creating from nothing, it's about making people from words and situations from letters. It's an awesome skill to have and it's a wonderful thing to do. I immensely enjoy it, though at times I do find myself stuck, and also at times I surprise myself and bring a plot to the surface that I had never planned on using. That is the great thing about writing fiction, there are no real "rules" as such. Even if you're not writing fantasy, there is still a little bit of leeway in what you have your characters do - artistic license if you will.

The thing you have to be careful about is that you don't go too far. The plot has to be real, it has to be believable (even if you are creating a whole new universe) and you have to be able to have a reason for whatever plot device you use. It's no good adding in a piece about your character going to the doctor or feeling very ill, if by the next chapter they are suddenly all better and fighting crime anew. That just doesn't make sense. And your readers can't believe in the plot if your characters don't believe in it too. For example, if a character is injured and there's nothing preventing them from getting to a hospital, get them there. Even if you really, REALLY want character A to nurse them back to health or for character B to get up and save the day. So, yes, while I say there are no hard and fast rules, there are some things your readers just won't let you get away with. However, it's really up to you how you choose to use, push and bend the rules of reality.

So, enjoy using them and use them as you will, but try to keep the balance between when and how often and why you use them in sync. You don't want to make it totally unrealistic, but you do have a certain degree of license.

Follow Joey on her Facebook page or her on her blog. Subscribe to be kept up to day about Joey and her books.
Posted by Joey Paul at 13:05