My Plantsing Ways - The Creative Process 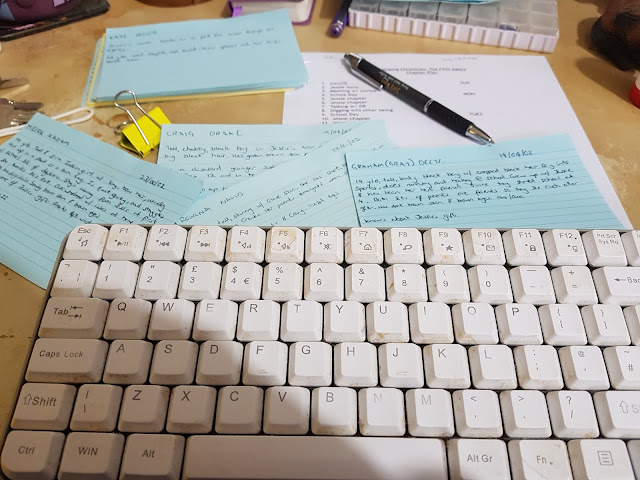 As you may know, I am a neither a full planner nor a full panster when it comes to drafting and writing in general. I need some kind of outline, however slim it may be, to be able to guide me through the story, though I don't plan in detail, and I do generally end up pantsing a lot of the drafting itself.

I thought that today I would give you some idea of what it's like for me as a planster, and how I work, and why I work the way I do. I know there has been a lot of talk in the writing community about being either one or the other, but to be honest I think most people are a mixture of the two. While there are some rare unicorns who are full on one or the other, the majority of writers have some element of each to their process.

So I'm going to break it down into the two categories: what I plan, and what I pants, and give you some details on each along the way!

WHAT I PLAN
-> I don't generally focus on word count, but do a chapter a day, and because of this, I need to know what happens in each chapter so that I don't have to worry too much about what I'm going to write. This stops me from getting writer's block and it also allows me to explore the story in my own way. Before I start writing, I will write out a chapter plan, with bullet points for each chapter and what I want to happen in it. Usually this is a sentence at most, but sometimes it ends up a little lengthier.

-> I plan my characters to a point. I make sure that I have their name, age, description and such, as well as any points that really stick out to me during the planning phase. Sometimes they spring fully formed in my mind, other times they end up a little distant and that's something that I need to work out more during drafting.

-> I plan my revisions, when I finish drafting, I will read through the book, a few months later, and make a detailed outline of what's happening when. This allows me to catch any errors and any plot holes, so that I can make the changes as I revise. It can take me up to three read throughs to get everything I need though.

WHAT I PANTS
-> While I will always have some idea from the chapter plan, there will be times during the drafting process where I go off plan, exploring a plot point that I've discovered along the way. This can lead to problems in the revision stage which is why I do the outlining then, so that I've made sure that I've tied up all the loose threads that I left while drafting.

-> I plan the main characters, but sometimes, like I said above, they don't really show themselves to me until I'm in the thick of drafting, and that's when the nuances and quirks of their personality will come through. I work out what kind of person they are, what they want, what their goal is, and all of that during the drafting phase. This can lead to issues where the first few chapters of the book don't match the rest, but I also edit as I go, so those are usually caught by then.

-> I pants the subplots. While I will, sometimes, have thought of them in advance, other times it's more important to me to find them along the way. Yes, this might lead to them being a little rushed or the like, but that's why I do the detailed outline when revising.

So there we go, those are my ways of planning and pantsing when it comes to drafting and revising a novel. By the time the book gets to the editing stage, I'm pretty solid in the story, and where it's going, as well as the characters, so it's easier to make changes based on that.