Review of Gates Of Demons by Tamar Sloan 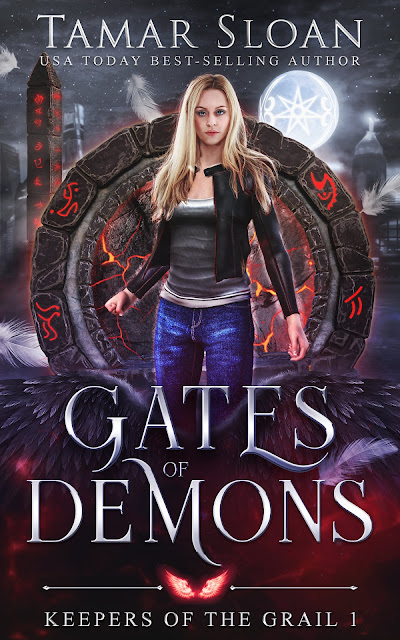 When a man appears in flowing robes, telling Reign he’s the Keeper of the Grail, Reign knows the inevitable has happened—he’s lost his mind. Content to cruise down his road of self-destruction, he refuses to believe the prophecies of death and devastation.

Arielle’s mom has been abducted. She soon learns her unassuming, scholarly mother dedicated her life to secretly researching the holy relic. Determined to find her before it’s too late, Arielle’s path crosses Reign’s. Their inexplicable draw to each other is a complicating factor neither of them want.

When demons close in, thirsting for the power of the Grail, Reign and Arielle are drawn into a battle of good and evil far greater than they could’ve imagined. As they race to find seven abducted women, they discover one of them is an Innocent.

An Innocent who will be the key to keeping the first Gate of Hell closed. And if they fail, not only will a deadly sin be unleashed on the world…Lucifer will be one step closer to raining his fury down on Earth.

I picked this up having read Solan before and always loved her way of twisting the paranormal into the story. Arielle and Reign were engaging characters from the first page, and I ended up flying through the story and finishing it in one sitting. The twists and turns of the story kept me guessing, kept me hooked on trying to work out what was going to happen next and how it would all sort out in the end. There were reveals I didn’t see coming and the whole story set up for an amazing series, one that I will be watching and following. Overall, very much recommended to all who love a good paranormal story!