Spoonie Writer: Comparison As A Spoonie 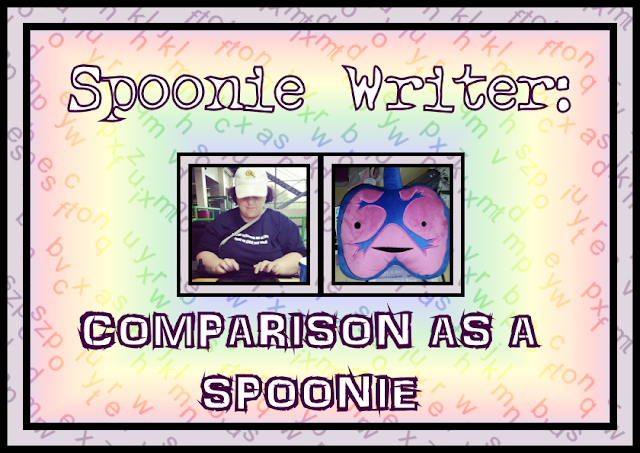 SPOONIE WRITER: COMPARISON AS A SPOONIE

I've always been someone to advocate not comparing yourself to others as a writer, as an author, and in general to be honest. However, I know that when you're a spoonie, and chronically ill/disabled, it can be hard to see all the things you're missing out on. The FOMO is real as a spoonie because while your friends and family are doing this, that, and the other, you're usually just trying to keep going at the slow pace and keep as healthy as possible.

One thing I've really found helps, is to remember that we're all, spoonies and non, working at our own pace. That said, it can be easy to fall into the trap of comparison, especially when it comes to people your age, your skill level and such, achieving their dreams while you're just about managing to keep your head above water. I've had a lot of health ups and downs over the past year, and while I'm hoping that 2022 will be better for me, it's not yet turned out that way.

So, it made sense to talk about the whole comparison game when it comes to being a spoonie. You've got the possibility of people your age, and even younger, just knocking it outta the park and if you're like me, you're over the moon for them, but at the same time, you're a little knocked back because you've not managed to get anywhere near your own goals.

People will say that I am super productive and super organised and while the latter is true, and the former is sometimes true, I do still feel like I'm missing out. I'll see other authors my age, who've maybe been doing this less time and they're doing amazing, and don't get me wrong, I'm cheering them on, but I'm also aware that it's gonna take longer for me, and that's just how it goes. When your life is basically living and surviving from hospital appointment to hospital appointment, you just have to go with the flow and hope that things all work out in the end.

So what can you do about it? After all, it's not like me saying, just don't do it, is going to have any effect. At the end of the day, spoonies and those with chronic conditions, whether physical or mental, they find that their lives are very much curtailed by the limits of our health. That's not to say that we can't achieve things, but that they generally seem to happen on a slower time scale.

I think it's really important to remember that when it comes to social media, you're very much seeing the highlights reel. While some people will share everything from the good to the bad and in between, a lot of the time, writers, authors, and other creative, they'll be wanting to share more of the ups than the downs because that's their public face, it's what a lot of readers see, and it's their way to make sure that it's putting their best foot forward.

While personally I try to include some of the down moments, it doesn't always work that way. To people watching my videos or seeing my instgram and twitter posts, I might seem like someone who doesn't really struggle with the day to day things, but that, I promise you, is not the case. I've been trying to be more transparent this year, but it's not always worked out that way. Like I said above, my health stuff has been up in the air and it's easier, sometimes, to just focus on the good. So I can't really blame other writers and such doing the same.

Just keep that in mind when you're seeing people's posts. You're not seeing the whole picture and that's okay, no one should be forced to share things they don't want to. Just remember that it's okay to grieve the loss of things you planned, of things you thought you'd have managed by now, and keep moving forward, keep writing, and keep creating, and know that you will get there!