Review of Triggered by Michael Evans 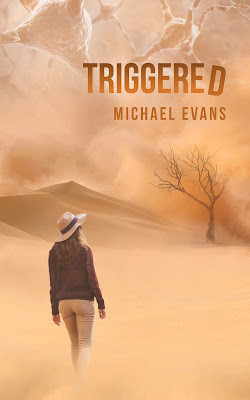 Memories will break you.

Natalie thought that she would be able to fix her past, but some things are forever broken. After being rescued from the rubble, Natalie is welcomed into a new world of horrors, where she is reunited with a humanoid version of Hunter and barred by Danielle from seeing her mom. With her newfound memories, there are only more questions and pain, and Natalie is finally ready to move on to a future where she can truly be happy.

But President Ash has a plan of his own, specifically one for not only ending the civil war in America but reducing everything to dust. A new program called Maga X has been in testing for years, resulting in the deaths of thousands. When President Ash decides to release this new program upon the population of America, he won’t just be mind controlling them, he will be vaporizing them from the face of the earth. However, Natalie, Hunter, and her mom have a plan, one that involves ending the life of one man to save the lives of millions. And this time it’s not just about saving themselves, it’s about saving everything before it all turns to nothing.
Amazon


My review: 4 stars
I was happy to read this book having read the previous two. The writer's style is not one that I was usually prefer, but I was able to get through the book and enjoyed reading it. Natalie is finally getting to a point where maybe she can have a life, she can have something that makes her happy, but everyone else continually wants something from her. They place so much pressure on her shoulders and it's enough to make anyone crack. Of course when you throw in the lack of knowing if her memories and what she feels is real, it's understandable that she switches moods so rapidly. The story is well-written, if a little wordy, but as I moved through the book I found myself making guesses at where Natalie's would end up, would she make the jump to save humanity, or would she stay focused on saving herself. I will say the ending surprised me and I would love to see where the series ends up going. Otherwise, a good book.

Join Joey here on the blog on Fridays for interviews, reviews and guest bloggers. If you'd be interested in doing any of those, you can contact Joey here
Posted by Joey Paul at 07:34