5 Facts About My Writing Routine 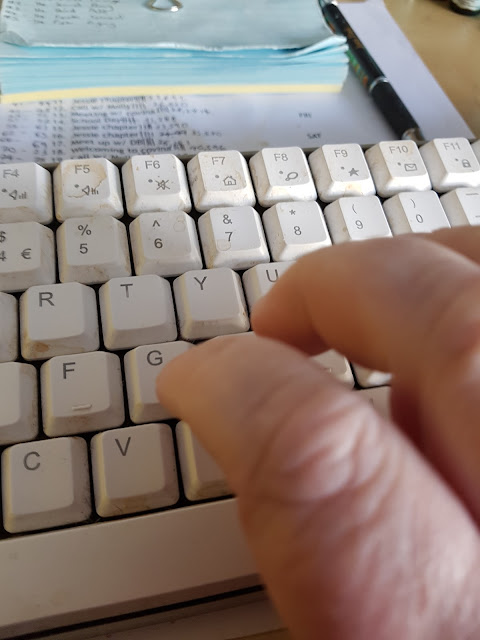 5 FACTS ABOUT MY WRITING ROUTINE

I liked giving you five facts about certain parts of my writing life, and thought that today I would give you five about my writing routine itself. I've been writing now for over twenty years, been publishing for over seventeen, and I've had so many different changes to my writing routine over the years that I couldn't tell you how many different variations there are. That said, I thought I would let you know the routine that's been working for me for the past few years or so.

FACT #1: I WRITE BETTER IN THE WEE HOURS
I didn't always used to be a morning writer. I have, in the past, been a night owl, an afternoon writer, an evening writer and everything in between. It's something that I kinda fell into when it came to this part of my writing process. My sleep pattern was, and still is, all messed up, and I was waking without an alarm consistently before five in the morning. For a time, I would putter about and then go and work on my writing at the usual time, but after a while I realised that it would be worth trying to have a go at writing first thing in the morning, and lemme tell you, it worked and I haven't looked back since!

FACT #2: I WRITE BETTER ON MY IPAD
Again, I didn't always. Before I got my ipad about three years ago now, I only had a tablet that wouldn't really let me write consistently when it came to doing other things at the same time. When I splurged on the ipad, it opened up a whole load of possibilities. I've done laptops, and obviously written at my main computer, but after a time it became easier to just keep the work in one place and on one device, which happened to be the ipad. While I do, obviously, do some work on my main computer, like writing blog posts and the like, I just prefer to be able to pick up and write anywhere, and it's easier to take a tablet along to places than it is to bring a laptop and the like.

FACT #3: TEA IS A MUST
I've always been someone who needs a cup of tea while they write. I've never liked coffee and I'm also allergic to it in that it'll make me wheeze, so tea was the natural thing to gravitate towards. I will always always have at least one cup per writing session, and while I mostly stick to decaf these days, I make sure that I have one before I start to write otherwise I find it harder to concentrate on the words and the like. It's been something that has stayed the same throughout all my years of writing, and I don't see it changing any time soon.

FACT #4: SILENCE IS GOLDEN
I know a lot of writers who swear by playlists and all of that. They can't write in complete silence, and they need to be fully immersed with sound as well. I don't know if it's down to my auditory processing issues, or just that I've always found it hard to listen and type at the same time, but I've never been a writer who's been able to write while having anything, music or TV or anything, in the background. Even when I write with other people in the room, I can't carry on a conversation of any kind and still manage to get the words written, or at least words that make sense!

FACT #5: COMFORT IS KEY
This might sound like a weird one, or maybe it's just something that every writer always has and kinda takes for granted. I have chronic pain issues, and I find that I have to be below a certain pain level to be able to effectively write. I also need to be somewhat comfortable, whether that's in bed, or in my wheelchair with the nice cushion, but if I'm hurting too much or struggling with comfort, then things just don't happen, and I find it harder and harder to get the words on the page.

So there we go, there are five facts about my writing routine, or at least how it looks right now. As I said, it changes, and fluctuates and all the rest, and I might do this again in a few years and see if any of these facts have switched around any, though I highly doubt the needing tea one ever will because I adore tea!