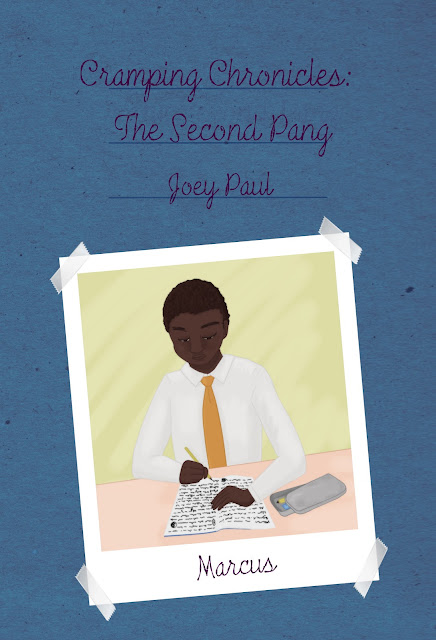 I always try and do these pieces in the run up to release. I know that I did one on writing Jessie and Meera for the first book, Cramping Chronicles: The First Twinge, which can be found here. However, since they both have a change in relationship when it comes to book two, I thought it would be a good idea to revisit them both. You can pre-order Cramping Chronicles: The Second Pang here, it comes out on November 15th!

So, for those who don't know, the series revolves around Jessie, who's fifteen, chronically ill and disabled, and has also recently become an empath. She can literally feel certain people's physical and mental pain. She was thrown into the deep end in the first book, and the second is really no different. So what's it been like writing these characters with all the changes going on?

JESSIE
Let's start here because she's the main character, and one that I really do vibe with the most. Jessie is changing in this second book, she started off being newly disabled and struggling with everything going on with starting a new school, and having to make new friends. She has those friends now, and she even has a girlfriend, but she's still a little on edge with the empath ability. She knows some, thanks to a friend on the forum, but she doesn't really have a big grasp on what to do when she gets more triggers, and this book delivers a trigger in a massive way.

Writing Jessie has always been a delight. I feel like I empathise with her the most, because like me, she has M.E and Fibromylagia, though her symptoms differ from mine and are more severe in some ways. I love getting to bring her to life on the page and getting to see her shine through the words. She's struggling with a lot in the second book. She has to worry about telling Meera the truth about her empath ability, she has to deal with a complicated new trigger, and she still has to keep on top of the piles of homework that she can't focus on because of all the pain she's under. It a lot, and I just like the growth she goes through, and the way she comes out of the other side.

MEERA
Meera is a complicated girl. She went through hell in the first book, and while she's very happily in love with Jessie, she knows there are secrets and she wants to know them all. Of course Jessie is holding back for all the, right in her mind, reasons, but it's hard for Meera to really understand that. I loved developing the relationship between these two and loved the way she's grown and changed over the course of both the first book, and the second.

Writing Meera was a tad harder than writing Jessie. I very much adore her as a character, but I always worry that I'm not quite getting her voice right. My editor tells me differently, but it's been nice to revise and bring the book to the point it is at now.

So there we go, that's what writing those characters has been like, if you have any questions, lemme know in the comments, and don't forget to pre-order Cramping Chronicles: The Second Pang here!